Alex Jones gets asked about Spirituallysmart.com Live on air

All my research on Alex Jones: spirituallysmart.com/Jones-CIA.htm

Do NOT Support War with Russia

To all United states servicemen and people. I am the descendant of military officers dating back to the founding of Jamestown in the United States. My ancestor is Joseph Bridger. Our lineage has fought in all wars starting with the Revolutionary. DO NOT GO TO FIGHT RUSSIA.

I am a born again Christian who came to Christ in 1997. I live my life in an ultra-conservative fashion. For over 25 years. In the name of Jesus the Christ and God the Father in heaven I DEMAND you not go. Russians are beautiful people and are our family. To fight them is Satanic

And you will surely meet a terrible end. The US is now the voice and representative of every kind of evil. Their male officers wear dresses. If you align with them, you are like them. Real Christians in this country will NOT support you. Because you will have sided with Satanic Nazis.

I hope and pray you think twice, and listen to reason. If not, you will surely join many of your recent predecessors who were either killed, or are now homeless, forgotten and suffering every day from PTSD and drug addiction. Because unjust war drives a soul to madness. DO NOT GO

I keep seeing videos and images of Ukrainian military personnel and civilians engaging in cannibalism and sick simulations thereof. So now I will tell people that Ukrainians are cannibals also. No wonder this spec-op is also being referred to now as the deSatanization of Ukraine.

Matthew 1:18 in six languages. You can see where a lot of the English came from. 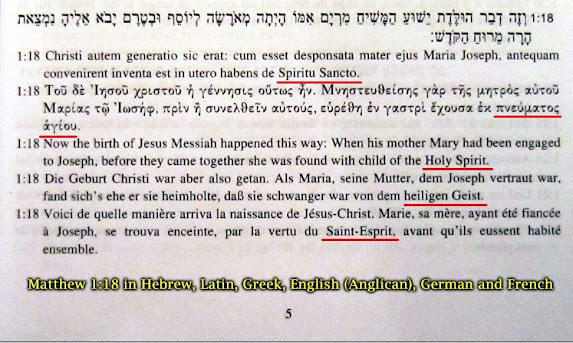 I was reading this Parallel & Interlinear New Testament Polyglot: in Hebrew, Latin, Greek, English, German, and French and I was noticing some pretty interesting things. The image here is a picture of Matthew 1:18. I have underlined all the places where "Holy Spirit" occurs (except for Hebrew). At the top you'll see in Latin "Spiritu Sancto." "Sancto" is the equivalent of the English word "Holy" and is where we get the word Saint, Sanctified etc. "Spiritu" is where we get the English word "Spirit." Below the Latin is the Greek ("πνεύματος ἁγίο"). When we read the word "saint" in the New Testament it is in fact the same exact Greek word for "holy." Pronounced "Hagios." "Hagios Pneumatos." Or in Greek it always reads "Pneumatos Hagios" (Spirit Holy). "Saint" is hagios and "sanctified" is hagiazó. See the similarities? Hagios and Hagiazó mean "holy" and "to be made holy," respectively. Below the Greek you'll see German. English is a Germanic language. Many of our English and Old English words come from the Germanic language. You'll see I underlined the German equivalent of Holy Spirit which is "heiligen Geist." That is where we get the King James Translation of "Ghost" for Spirit. "Geist" is translated as "Ghost" in Old English. But "ghost" has become obsolete. We now use the word "Spirit." "Ghost" has taken on a whole new identity which shouldn't be mingled with biblical Christianity (imho). Below the German we see French and we can see "Saint Esprit." That French word "Saint" (Holy) is also derived from the Latin and "Esprit" is the same.

In the beginning of this book the author writes, "Why these Languages and Particular Versions? The short answer to this question is that these languages --Hebrew, Latin, Greek, English, German, French -- are the basic research languages for the field of New Testament studies..."

And I think this verse (Matt 1:18) highlights this fact perfectly! I pray God the Father and the Lord Jesus the Christ bless you through the study of His Word. Amen

Nazi-Ukraine, A Creation of the Vatican and the Jesuits (Big Update) 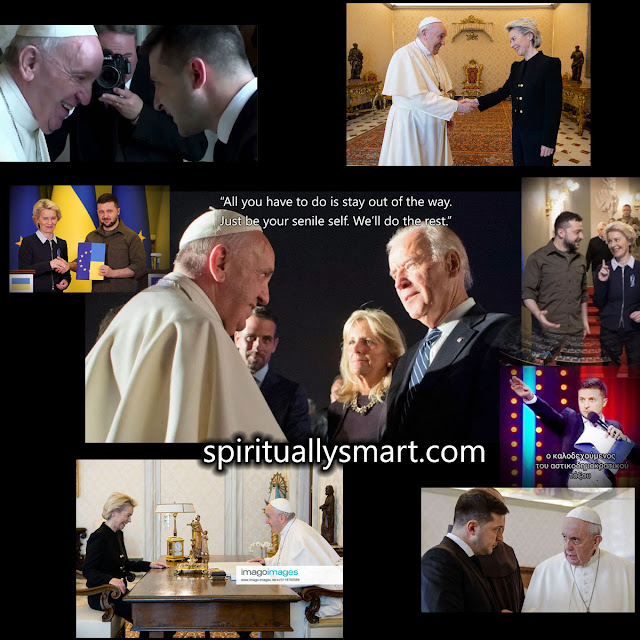 Updated my Vatican-Nazi page which now connects the Vatican, The US, EU, NATO to the revived AXIS powers which are coming together to start WW3 by provoking Russia through their proxy, the Ukraine: https://spirituallysmart.com/nazi.html
2/28/22: There is a major update for this web page regarding the Russian-Ukrainian War. This information has earned me special censorship from Twitter, Facebook, Google, Youtube and many other companies. So Please Allow this page to fully load. It is worth your time, I promise. Also keep in mind that this Page was Created for PC use, not Phones. Consider this page as a research lead because I cannot fit everything in here. There are hundreds of pieces of documentation proving it to be true.

!! ALERT !! April 28 2022 - The United States, EU, NATO and all affiliated countries are now Nazis and now make up the revived AXIS Powers. The etymology of Nazi is the German form for Ignatius. Yes, the Ignatius who founded the Jesuits for the purposes of the counter-reformation. And now, for the first time in history we have a Jesuit (Nazi) Pope. And he is initiating WW3 against their dreaded enemy, RUSSIA. The same RUSSIA that defeated Nazism during WW2. This web page serves as documentation of the fact that the Vatican and the Jesuits were responsible for Nazi-Germany and WW2 as a whole. And Now I will add the newest and most relevant part of my work which is now the most important and censored information in the world. Adolf Hitler called the Ukraine "the Jewel of the [Nazi] German Empire]. Now we see why. It's because that is where Hitler wanted to set up forces for the eventual destruction of RUSSIA.

The First Pieces of Information You Should Know:

1. Russia's President Vladimir Putin did NOT want this War but was PROVOKED by the United States who had stationed themselves within Ukraine for provocation purposes.

2. Putin has lost many family members to the Nazis

3. The Vatican has always hated the Russian Orthodox Church and Communism. There's been interesting comparisons between the founding of Communism and the manner in which God created human beings. It's said that the creation of Communism was based on the fact that human beings are created in the image and likeness of God and therefore can also be great creators. The Vatican and the United States teach the opposite and is only seeking to make everyone stupid and corrupt through the public school system. Therefore, they make their private catholic and military schools far superior and then go on the best universities and positions where they will always be servants of their Roman Catholic Masters.

President Putin lost a Brother, Grandmother and at least two Uncles to Nazi forces. Both Putin's parents served in Russia's military to fight Nazis. His father was severely wounded in battle. This is the most incredible history here. Putin's life was deeply affected by the Nazis. My God, no wonder why Putin is so great. God help him.

Putin's father was a war hero and earned the equivalent of the #PurpleHeart.

The very thing the US media hides and has always hid. This silence speaks VOLUMES. This should be on the front page of every newspaper. This is very important. It's even on wikipedia.

One should be aware, Nazism has been mainstream within the Ukraine since the end of WW2 (Ukrainian Nazis murdered Jews and others), but it has spiraled out of control more recently. This is why Russia had to go into Ukraine for the purpose of DeNazification and liberation of the anti-Nazi faction within Ukraine. The Ukrainian Nazis have been terrorizing Ukrainian civilians for years. The videos and documentation can be found online if one wants to look.

Please pray that God protects and blesses Russia as they DENAZIFY the Ukraine and liberate the persecuted anti-Nazi factions within the Ukraine! Also, pray to God that He punishes this country for allowing so much wickedness and filth to take place here as they target everyone through their satanic social engineering via public schools and universities.

I'd love to know why Eugene Nida and/or Barclay Newman make no mention of the word rhomaisti from John 19:20 in A Translator's Handbook on The Gospel of John. And after searching through many lexicons and commentaries I've found almost a complete lack of any useful information regarding how rhomasti is the word for Latin. Why isn't it just "Latin" in Greek? Surely that word can be translated.

The truth is, the word "Latin" doesn't appear in the Bible.

Also, the word rhome, which means, strength, vigor etc. Surely that was a Greek word in which the great city Rome was named after. Why do I only see this mythological explanation about Remus and Romulus? Why has no scholar or researcher explained this? I've looked everywhere.

The image shows a screenshot of Proverbs 6:8 from Swete's LXX. It is also found in Rahlfs LXX. This is the only surviving usage of this word (ῥώμῃ) that I have found.